In dealing with the virus, class matters. Though even for the well-connected, it is not always easy to get access to help.

A crisis is the sum of intuition and blind spots, a blend of facts noted and facts ignored.

– Michael Crichton in The Andromeda Strain (1969)

The coronavirus, unlike Crichton’s fictional Andromeda strain, was showing no signs of disappearing into the upper atmosphere.Yet, for the first one and a half months of 2020, the middle classes in Delhi took COVID-19 to be largely about happenings in New York and Italy.

The WhatsApp groups of school and college peers were full of chatter about the fate of NRI doctors abroad, the risks to their lives, and, ‘Oh, the sacrifices that they were making.’ Our networked middle-class was looking westwards but soon all things coronavirus came close to home and then much too close.

Towards the middle of February, COVID-19 news from Kerala and Mumbai had begun to register with Delhi’s middle classes. At first, it was, ‘Ah, just a few foreign returnees, poor things, who now have to be quarantined.’ But by mid-March, COVID-19 had caught up with Delhi and the conversations turned one-eighty degrees with the lockdown.

What became apparent alongside were slants on intra-class and inter-class divides, underscored by COVID-phrased life chances.

The hurry and flurry: Assembling and networking to survive the COVID-19 onslaught

As the virus crept into more and more homes, Delhiites were worried like never before. Notes on how to disinfect vegetables, enriched with a mixture of home chemistry, and the early rosy chatter accenting the BCG vaccine advantage for India gave way to the self-learning of sobering statistics on doubling, positivity and fatality rates etched in pandemic mode.

Amid media reports that state hospitals were flooded with the COVID-infected, rumours floated about how the rich had reserved rooms in private hospitals as a life-saving tackle – a Delhi version of what Manuel Castells might describe as the material and immaterial ‘space of flows’ in a networked society.

Admission into a public hospital in Delhi could seldom be pulled off without pulling strings or activating ‘contacts’ as these are termed in city jargon.

‘Keep your list of doctor contacts ready…it could be your life-line,’ is how a US-based son advised his mother.

‘We can send you Remdesivir if you need it’, said another son.

A woman who kept her doctors’ network well-oiled (wishing the precious medics well with liquor bottles every Diwali) said, “Well, well,  so far they have never let me down, but this is a treacherous time and my  gut feeling is that the whiskey might have  gone down the drain.”

Gradually, it had become clear that middle-class camaraderie would not be able to deliver a place in an ICU-equipped hospital. But neither could the members of the not-to-take-things-lying-down class abide the thought, good heavens, of being in one of those beds in a stadium or railway coach, if it could be helped. And so, the best wager for the betwixt and between people zeroed in on self-help and home care. And with go-getting fervour, the middle classes started assembling the COVID-19 hardware.

The middle class in its will-not-say-die mode was no longer going by the state’s promises or statements.

Suddenly, what looked like a bona fide medical prescription recommending home care for a named coronavirus-infected patient by a doctor in a prestigious private hospital in the city began to circulate like wildfire among several WhatsApp groups here. It saw multiple forwards and appeared to be good enough for people to decide the medicines to stock right away. At the bottom of the prescription was advice on the need to monitor oxygen saturation levels by an oximeter and to keep an oxygen cylinder handy.

And so, the flurry for these medicines began in right earnest. To pursue the chain of events that followed this prescription with one WhatsApp group, hydroxychloroquine gave way to Ivermectin as the silver bullet of medicines to reserve for now. But chemists in four residential enclaves refused to provide the coveted Ivermectin without a doctor’s prescription. And so more frantic calls followed within that friends’ group. And lo and behold, one chemist was willing to supply the stash which would suffice for this group of 12 or so.

The to-do about the oxygen cylinders began later. Back to the WhatsApp group, a member was referred by another member to his wife’s friend who had a ‘contact’ who smugly reported that she had already procured two cylinders, one for herself and one for her husband but she was not sure that the agency would supply in the National Capital Region (NCR).

And so, he called up a second friend who mailed him an Oxygen Emergency Services number. And he was helped to hire a cylinder (which he planned to share with his brother in an emergency to keep costs manageable). A third friend in the group mocked his over-preparation: ‘Hey, don’t be silly! You should have just got yourself an oximeter and a couple of oxygen cans.’

But the diehard fourth comrade would not approve of anything less than oxygen concentrators. He had prevailed upon his RWA (Residents’ Welfare Association) to rent one of those. This RWA had also organised a team of volunteers to care for any resident infected with the virus and was equipped to operate its services on a turn-key basis from housing

Homing in on COVID-19: Which housing class are you?

The significance of what can loosely be called a housing class was heightened through the coronavirus crisis. The sociologist Max Weber, had shone a light on the middle classes, and he reasoned that neighbourhoods (and not just economic positions) affected ‘life chances.’ With the arrival of the coronavirus in Delhi, the virus’ s signature behaviour spawned distinct neighbourhood effects and affected life-chances differentially.

While social scientists are plagued with doubt about how to depict India’s urban middle classes (is it income, occupation, subjective self-identification?), both Delhi’s residents and newcomers to the city have had no such hesitations.

“A house in Delhi, rented or owned”, said an acquaintance synopsising the popular view, “puts you squarely in the middle class. You are no longer poor, but you are not upper class either. ”

What crystallised after the COVID-19 fever gripped the city was a finer differentiation of classes by types of homes – a classification made hypervisible by an invisible virus.

The uppity end of the long middle-class spectrum often lived in a stand-alone two-or-three-storeyed building endowed with what in city dialect is known as SQ (servants’ quarter). These residents had the privilege of being cocooned at home with live-in domestic help. The early weeks of COVID-19 here were agog with zoom parties and cool talk about flattening the curves outside while willy-nilly fattening at home and yes, baking the current international favorite – sourdough bread.

Occasional forays to the market apart, their house helps stayed indoors in the mutual interest of maliks and workers. And while it may appear that their life continued unaffected, instances of the in-house staff of guard, cook, or driver transmitting the disease to the maliks increasingly surfaced in an unanticipated turn of workers coming home to roost. The local government’s notice of the inmates being infected by the coronavirus, outside these latter disease-ridden homes, came to be displayed clearly to all passers-by, a branding that further disconcerted the residents. 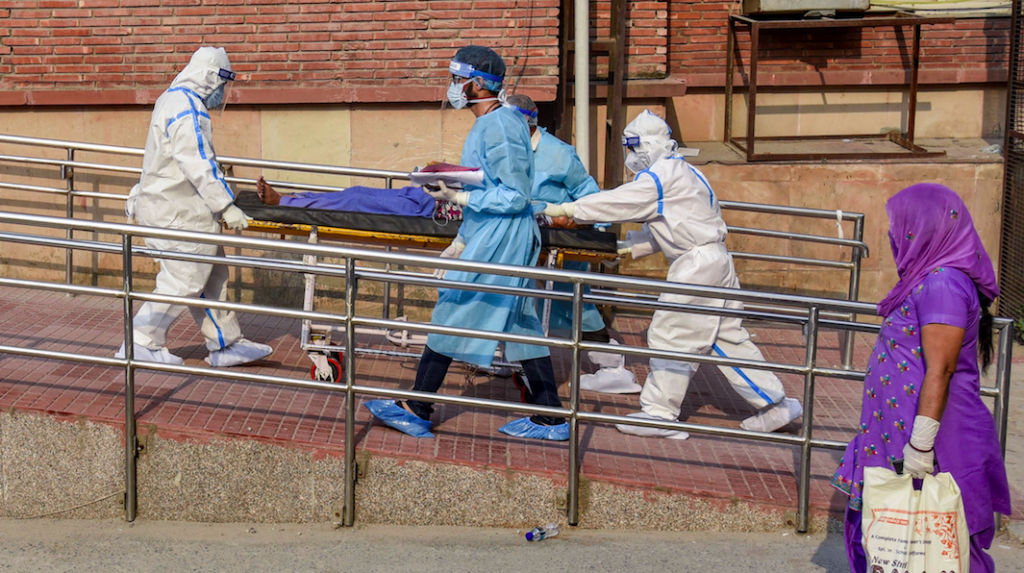 A few apartment blocks had SQs but with the ever-intensifying space crunch, this meant a departure from the norm. Residents of  SQ-less apartments and homes rested on part-time domestic help. The part-timer, more often than not, serviced more than one household and lived in a squatter colony close by. The threat of her carrying the virus barred part-time domestic workers from entering apartment complexes under the zealous dispensation of RWAs and muscled security personnel. These apartment residents now had to clean, mop, and wash dishes, services that were no longer outsourced. As an apartment resident put it: “The COVID-19 has birthed another kind of BJP…the ‘Bartan Jharu Pocha Party’ (‘the Utensils, Broom and Mop Party’).”

In contrast to the now magnified relevance of the salubrious metric distance between stand-alone homes, an apartment block had to contend with the risk of harbouring the virus in its multiple small and narrow contact zones such as lifts, stairwells, and corridors that defied physical distancing. Into the later weeks of May, the coronavirus had inched too close for neighbourly comfort.

Infrequently, but even when two households were infected, the apartment floor (or block) was declared a containment zone with all entry and exit points sealed off. An anxious resident confided: “I feel so vulnerable: Just imagine! I share a common wall with the COVID-19 patient next door.”

Also read: The Right Time to Speak of Housing Rights in India is Right Now

The RWAs were unrelenting once the disease began to show a statistical downturn as well. While one RWA peremptorily restricted visitors to three relatives a day, another RWA, for instance, constrained the number of non-resident visitors to five for the Raksha Bandhan celebrations. The virus carriers, it was argued, were not just the domestic helps and so all outsiders were risky presences though on earlier considerations house helps were excluded because as an RWA circular put it ‘they come from congested and possibly contaminated areas.’

The bout of ifs and buts before the state settled somewhat imprecisely upon rules for home quarantine is on record. The administration tried to figure out whether two rooms and one toilet would suffice for a person to qualify for self-isolation at home or was the requirement of a separate room and a toilet exclusively for the patient.

It seems that the matter is now left to an inspector who certifies whether the patient can be housed at home without rendering the family members, neighbours and the locality increasingly vulnerable. Yes, the middle-class person who is COVID-19 positive and lives in this certified middle-class house can self-isolate at home, or else she would be dispatched to a stadium or ashram turned COVID-19 care facility. 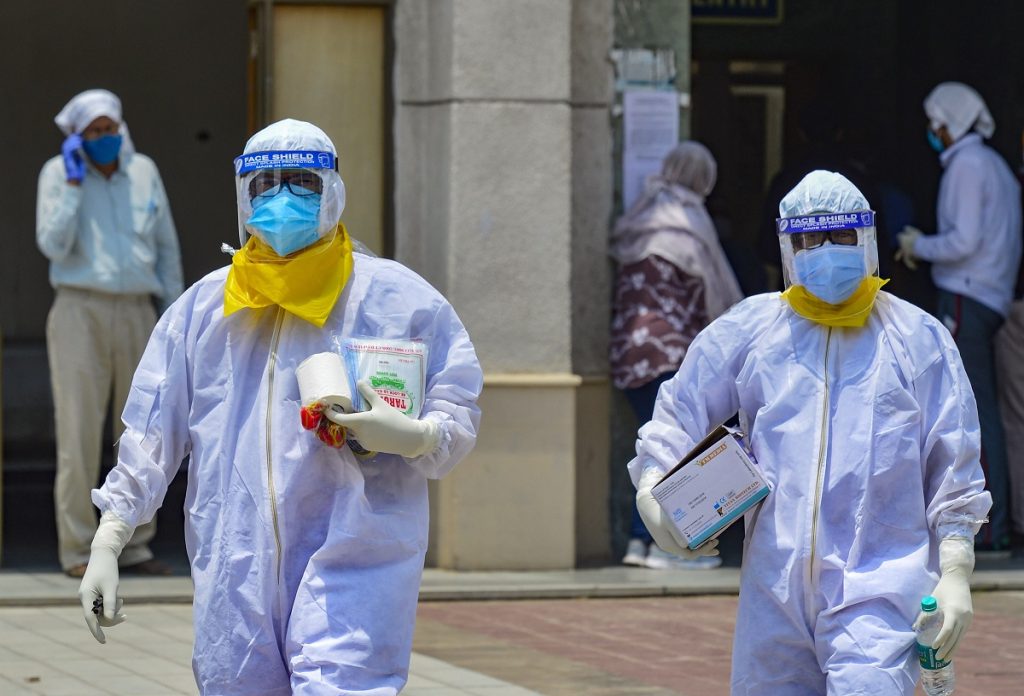 At the other end of the scale, residents of squatter, resettlement, or unauthorised colonies who worked as domestic helps or plumbers and carpenters, for instance, were locked out even when the neighbourhoods where they lived were not circumscribed within the notified containment zones. Just the fact of living in a crowded locality in the city, albeit COVID-19-free, had turned these residents into jobless outcasts as is well documented now. Here neighbourhoods demarcated COVID-induced tribulation for their residents with a doubling that affected work and stigmatised inhabitants. Households in large and small slums, unauthorised colonies, and urban villages are still heavily surveilled and recurrently screened for signs of COVID-19 under what may be described as rule-by-containment-zone that is rammed home.

society to hospital and back, (‘Inshallah’), all worked out through the neighbourhood’s WhatsApp group.

Patently, albeit without patents, the survival toolkits of middle-class Delhiites, engulfed by the perils of COVID-19, were buttressing Bruno Latour’s contention that assemblages and networks are indeed co-built with the agencies of material objects (such as houses, hospitals, the internet, instruments, medicines) and people – in other words, and strikingly, both the non-human and thehuman are actants or players here. The animation in this case, of course, was brought about by an inhuman virus.

So even though the lockdown in the Delhi region may be over, for now, home truths as the fallout from existent or lurking exposure to the coronavirus are still being unlocked in the city’s neighbourhood-phrased and networked society.